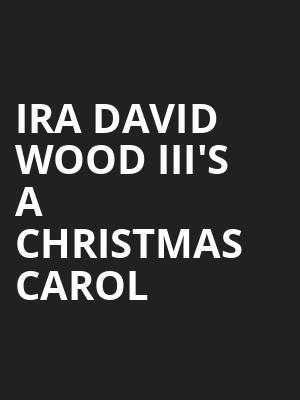 Photo by Hide Obara on Unsplash

First staged in 1974, this version of Charles Dickens's classic is an absolute must-see if you live in the Durham area. Cited as "one of the most successful shows in North Carolina theater history", the show turns the tale of Scrooge into a joyous musical comedy, packed full of spirit and show-stopping tunes, while still preserving the poignant heart of the original. It's a real local success story and has enjoyed hugely acclaimed tours in both England and France.

As everyone knows, A Christmas Carol tells the story of the miserly Ebenezer Scrooge, who is visited on Christmas Eve by three ghosts, who teach him the error of his ways. Ira will be taking on the role of Scrooge as usual, sharing the part with his son Ira David Wood IV!

Suitable for all the family

I love theater and have been going to shows since my early 20’s but only... more

It wasn’t what I was expecting but I loved every minute of it It’s... more

Sound good to you? Share this page on social media and let your friends know about Ira David Wood III's A Christmas Carol at Durham Performing Arts Center.