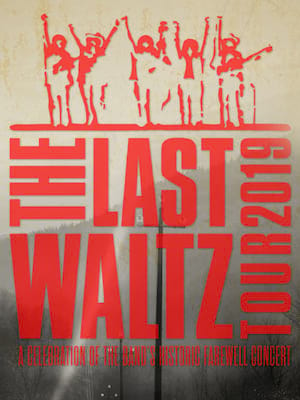 ... the Band gave their final concert in their original lineup, a massive swan song that these Canadian troubadours turned into an all-star spectacle.

Why See The Last Waltz Tour?

Held on Thanksgiving Day in November 1976 at San Francisco's Winterland Ballroom, The Last Waltz was The Band's farewell show and went down in history as a cult classic concert thanks to its cinematic immortalisation by Martin Scorsese and special guest performers including Eric Clapton, Dr. John, Joanie Mitchell, Muddy Waters, Neil Young, Van Morrison and Ringo Starr, amongst others.

Don't miss out when jam band icon Warren Haynes, Lukas Nelson (son of Willie Nelson) and country crooner Jamey Johnson pay tribute to the concert to end all concerts when they hit the road during the Last Waltz Tour, bringing the historic set list to life for a strictly limited run of twelve North American dates. Joining the trio for commemorative renditions of songs like Up On Cripple Creek, The Weight and Who Do You Love will be keyboardist John Medeski, drummer Terence Higgins and trombone player Mark Mullins, as well as guitarist Bob Margolin, who performed alongside Muddy Waters at the original concert.

Sound good to you? Share this page on social media and let your friends know about The Last Waltz Tour at Durham Performing Arts Center.