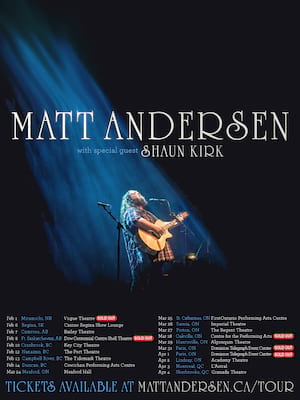 Andersen's resonant voice practically purrs. While there's lots of tasteful instrumentation across the album, from guitar to horns to organ, Andersen's vocals are front-and-center and the draw of the album.

Best known for his powerful set of vocal pipes and dazzling acoustic guitar work, celebrated Juno Award-winning Canadian bluesman rose to prominence as the front man of New Brunswick outfit Flat Top before setting out to take the nation by storm on his own terms, releasing his debut album One Size Never Fits in 2004. Fifteen years and eleven albums later, Matt hits the road in support of his latest record Halfway Home By Morning, the honest and uncompromising 2019 album that's already sent the Juno Award-buzz into overdrive once more.

Joyful and electrifying, the album fuses elements of old school blues rock with a shimmy and shake swagger, exploring every facet of his influences - from gritty Americana to fire-starting R&B, satisfying, sweat-laden soul and lovelorn folk. In the same vein as Neil Young, Emmylou Harris and Jerry Lee Lewis, Anderson knows a thing or two when it comes to telling a story, whether it be on record or on the stage.

Sound good to you? Share this page on social media and let your friends know about Matt Andersen at Cat's Cradle.